A man whose wizardry in the kitchen is rivaled only by his wit and the charm he brings to home cooking.

A Philadelphia native turned self-proclaimed Texan, Chef Geoffrey Michael’s flair for style and innovation have enabled him to build a professional resume that reads like a “tour de force” of the nation’s most elegant dining establishments.
Chef Geoffrey’s past accomplishments include:
·      Youngest Banquet Chef in the history of New York’s famed Plaza Hotel where he later served as Executive Sous Chef
·      Experimental Chef at New York’s Waldorf Astoria
·      Sous Chef at the New York Hilton
·      Executive Chef at New Orleans’ acclaimed Royal Orleans’s Hotel
After four award winning years in New Orleans, Chef Geoffrey in search of new challenges, moved to Waco, Texas where he opened a nostalgic restaurant in the old Water Works building on Valentines day in 1975.
As a regular Waco television personality Geoffrey demonstrated his cooking skills for thousands of viewers. His down home style and personal warmth made him a favorite speaker throughout Central Texas.
With a love for the river and his Huckleberry Finn personality, Chef Geoffrey then moved his base of operations to the River Boat restaurant, Brazos Queen II.
The Chef now guides his international spice business and travels the great state of Texas demonstrating his miracle seasonings.  When the Chef is not working, he removes his Tuque and dons his Stetson.  He enjoys training his horses and loves working with his border collie, Jake.  The Chef lives on the Brazos River with his beloved wife Marcia in China Spring, Texas. 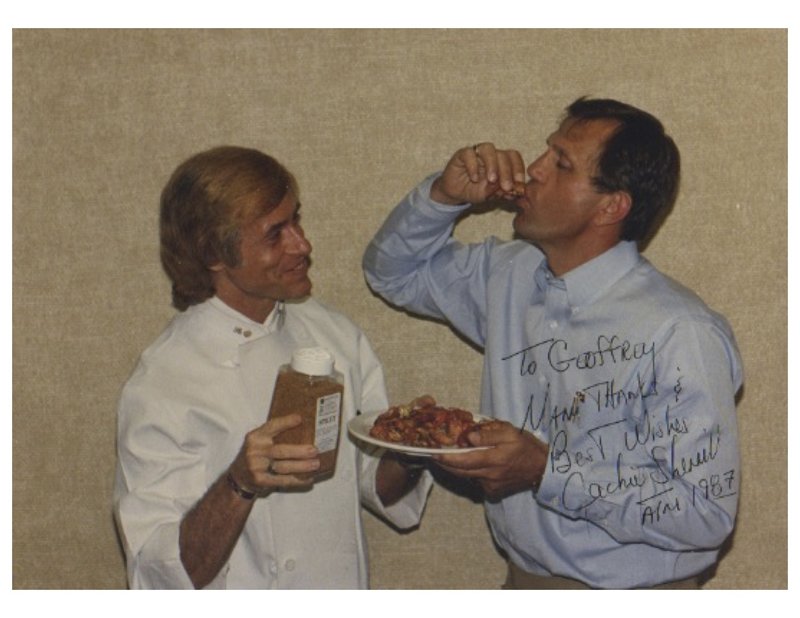